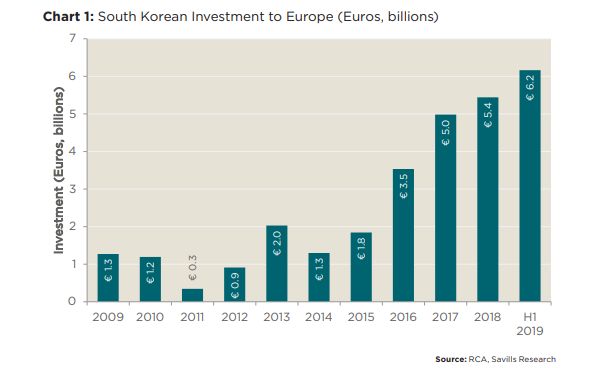 The figure is up from just 3% in 2018, according to a special report from international agency, Savills.

Offices is the stand out sector

One sector stands out in particular – offices attract 88% of South Korean investment into Europe, followed by industrial on 11% and just 1% for others.

Paris is the leading target, with €4.4billion of CRE acquired or under offer by July 2019, boosted by a weak Euro and cheap debt. French debt can be obtained for around 100-120 bps a year, but UK debt costs in the region of 250 bps a year. This helps to justify prime office yields at around 3% in Paris CBD and 4% in central London.

Savills says, “In many respects, the last two years have provided the perfect storm for the growth of South Korean Investment into Europe.” A shortage of domestic investment listings has accelerated the rush.

South Korean sovereign wealth funds have increasingly sought alternative investments, including real estate, and the office sector, with the lowest volatility in returns, has benefited.

“Given the rising political risk surrounding a China- US trade war and demonstrations in Hong Kong following the proposed extradition bill, Europe has become relatively attractive for those investors in search of long income and lower sovereign risk, with South Korean investors placing a great deal of importance on national credit ratings.”

However, South Korean investors have been relatively undeterred by Brexit uncertainty and have acquired €2.2billion worth of UK commercial property in 2018 and a further €1.4billion during H1 2019.

Savills believes the next target for South Korean investors could be the Nordic cities of Copenhagen and Helsinki, as well as the Irish capital, Dublin.

There has also been rising interest in Central Eastern Europe. This includes South Korean REIT, JR AMC acquiring Budapest office, Nordic Light Trio from Skanska for €41million and AIP AM buying the new Twin City Tower in Bratislava for €120milion from HB Reavis.

To meet income return targets, there is a growing willingness for Korean investors to co-investment alongside experienced European asset managers.